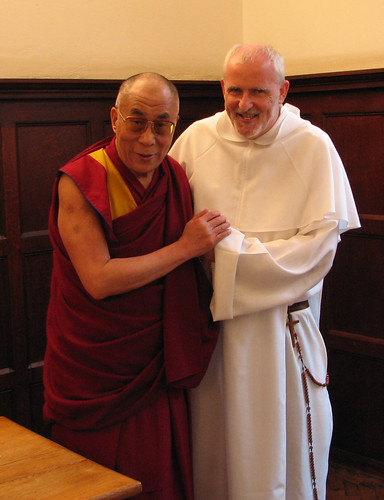 “I cannot quote these lines here, in the presence, this afternoon, of His Holiness the Dalai Lama, without remarking on the manifest joy, the cheerfulness, which so often lights up his face and indeed, at times, illumines his every expression, and this in spite of the enormous difficulties and trials which he has to endure – a “cheerfulness” which, we can be sure, springs from his own life-long dedication to the practice of meditation…”

“Having already hosted Cardinal Walter Kasper this term, Blackfriars received another distinguished visitor in the person of the Dalai Lama who came to take part in a colloquium on 'Christian and Buddhist Contemplative Prayer'. The proceedings were opened by Fr Paul Murray, an Irish Dominican who lectures at the Angelicum in Rome. He spoke about contemplative prayer in the Dominican tradition, drawing in particular on the writings of three of the Order's great spiritual teachers, John Tauler, Catherine of Siena and Meister Eckhart… There was then some discussion about various aspects of Buddhism and links with Christian traditions of prayer. The most fascinating question was whether the reality that is sought in prayer, whether it is called 'ultimate reality' or 'God', is a reality that seeks us. It was a wonderful moment for Blackfriars. The Dalai Lama had joined the community for midday prayer before the colloquium: his prayerful reverence towards the altar, the tabernacle, and the brethren, was very deeply moving. He spoke as powerfully in the way he was present with us and to us as he did by his words…”

Richard Finn OP MA DPhil (Oxon) MA MPhil (Cantab) is Head of House at Blackfriars Hall and Regent of Studies of the English Dominican Province. He is a member of the Theology Faculty of Oxford University and lectures in Augustine and Church History. He is the author of Almsgiving in the Later Roman Empire, published by Oxford University Press.

St. Hyacinth (1185-1257) is called "the Polish St. Dominic," which is to say that he was the founder of the Dominican Order in Poland the dynamo of holiness in the North that St. Dominic was in the South… Hyacinth's life was henceforth an almost uninterrupted series of miracles. He walked a total of nearly twenty five thousand miles in his apostolic travels, preaching in all the countries of the North, from Denmark and Prussia to Greece, White Russia, Tartary, and Tibet…

Eckhart's status in the contemporary Church has been uncertain. The Dominican Order pressed in the last decade of the 20th century for his full rehabilitation and confirmation of his theological orthodoxy; the late Pope John Paul II voiced favorable opinion on this initiative, even going as far as quoting from Eckhart's writings, but the affair is still confined to the corridors of the Vatican. In the spring of 2010, it was revealed that there was finally a response from the Vatican in a letter dated 1992. Timothy Ratcliffe, then Master of the Dominicans and recipient of the letter, summerized the contents as follows: 'We tried to have the censure lifted on Eckhart', writes Timothy Ratcliffe, 'and were told that there was really no need since he had never been condemned by name, just some propositions which he was supposed to have held, and so we are perfectly free to say that he is a good and orthodox theologian.'…

“If we turn from the forms, produced by external circumstances, and go to the root of things, we shall find that Sakyamuni and Meister Eckhart teach the same thing; only that the former dared to express his ideas plainly and positively, whereas Eckhart is obliged to clothe them in the garment of the Christian myth, and to adapt his expressions thereto…” (Schopenhauer, The World as Will and Representation, Vol. II, Ch. XLVIII)

“In 1992 Pope Benedikt XVI (the then Prefect of the Congregation of the Doctrine of the Faith) had accepted the petition of the Dominican General Chapter to rehabilitate the famous German theologian and philosopher, Meister Eckhart (ca. 1260-1329)…”

Recent Posts from This Journal